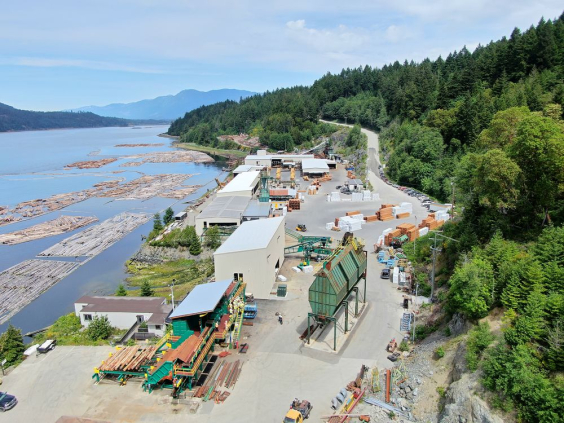 The B.C. lumber firm San Group on Friday rolled the first log through a brand new sawmill it has built at Port Alberni, a bright spot on a forest-sector landscape that has been otherwise dim.

The symbolic occasion caps off San Group’s multi-year campaign to re-tool its corner of the industry into a fully integrated, high-value producer of specialty wood products that restores at least some jobs to a sector that has made more news in recent years with mill closures and permanent layoffs.

What it means to us is we see a very bright future,” said Kamal Sanghera, CEO of the Surrey-headquartered San Group. “We can see the light through the tunnel to how to survive.”

And the company’s strategy is in keeping with Premier John Horgan’s theme of shifting forestry “from high-volume to the high-value economy.”

“So they are preaching, we are doing it,” Sanghera said.

For Port Alberni Mayor Sharie Minions, a big believer in the high-value concept, Friday’s opening was an exciting development.

“In the Alberni Valley, certainly it has been a while since we’ve seen this type of investment in our sector,” said Minions, who was at the mill Friday to watch that first log run through. “It is a very positive thing for our community.”

Sanghera estimates San Group will have spent between $120 million and $150 million on its Port Alberni operations by the end of this year, which will eventually support some 250 jobs between two sawmills, a remanufacturing mill and shipping facilities.

And while markets for commodity lumber continue to be soft, Sanghera is confident the San Group operations will be turning out specialty wood products for sale in 29 countries.

San Group arrived in Port Alberni in 2018 when it bought an existing sawmill, geared primarily to handle old-growth timber, and a 10-hectare plot of land next to the Paper Excellence pulp and paper mill.

Its plan was to build a second high-tech, highly automated sawmill — the facility that opened Friday — engineered to process small logs, from three-to-14-inches in diameter that are typical in Vancouver’s second-growth forests that are becoming ready for harvest.

The company is also building a remanufacturing mill, which will be capable of taking scraps of wood the other mills can’t use — “the guts and feathers,” Sanghera said, using industry slang — and turning them into engineered wood components.

Earlier this month, San Group added another element to its formula by buying and re-starting another specialty mill in Port Alberni known as Chalwood Forest Products, that had been dormant for more than a year. It can turn out timbers as long as 40 feet, or 12 metres.

“We are doing everything in-house, start from the forest, all the way from harvest to home,” Sanghera said, using the company’s slogan to describe its strategy for integrated production.

The idea is to harvest timber, which San Group buys on the open market, then turn out products to the specifications of its customers, with larger dimensions turned out by one mill and smaller dimensions at the new high-tech mill.

Then scraps that none of the other mills can use will be laminated or finger-jointed into useable, engineered components, with wood waste being dispatched to Paper Excellence’s pulp digesters and finished products shipped off the dock at Port Alberni to markets around the world.

“My target is to keep the (wood) fibre in Canada so we can keep the jobs in Canada and create value,” Sanghera said. “Compete with technology instead of compete with labour and put my fellow Canadians, fellow British Columbians, back to work.”

It is an attitude that is ahead of the reckoning that B.C.’s coastal forest industry will have to deal with as it struggles with increasing costs in the production of commodity lumber.

“They are doing what many others are thinking of doing,” said Brian Hawrysh, CEO of B.C. Wood, a not-for-profit trade association for value-added wood producers. “And that’s how we extract more value out of the fibre.”

Hawrysh said San Group was smart to recognize that Port Alberni was central to a lot of second-growth forests that are coming into maturity and becoming a bigger source of timber as available supplies from old-growth forests are declining.

“The standard model of (thinking) there’s going to be an ongoing supply of old-growth logs on (Vancouver Island) is probably not well thought out,” Hawrysh said.

And he said markets for specialty wood products have been better than dimension lumber markets and, prior to March, were poised for still more growth.

“To date, most of our value-added and specialty manufacturers have weathered the COVID storm quite well,” Hawrysh said. “They’re not seeing dramatic downturns and closures that you’ve seen on the commodity side, although I’m worried about where we’re going to be in six months, if we’re seeing ongoing economic slowdowns.”