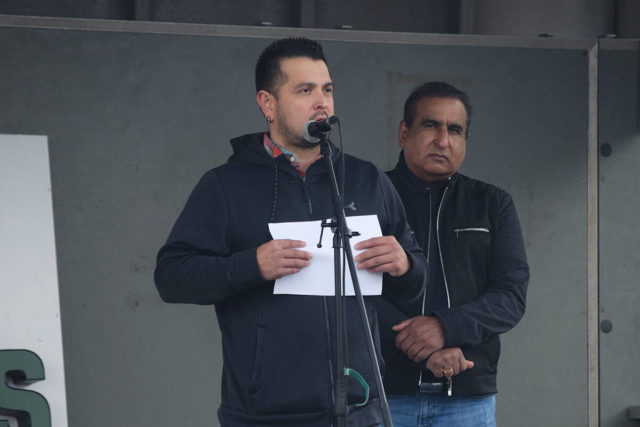 A rainbow emerged from behind the rainclouds as a good omen just before the unveiling of a new totem pole in Port Alberni.

The Language Revitalization Pole that started as a United Nations project found a permanent home in Port Alberni on Nuu-chah-nulth territory on Saturday, Sept. 18. The totem pole, which has been named n’aasn’aas?aqsa, was unveiled at a piece of property near Victoria Quay owned by the San Group.

Hundreds of people showed up to watch the unveiling of the pole carved by Nuu-chah-nulth artist Tim Paul. The event on Saturday featured Tseshaht First Nation dancers and drummers and a special performance by Kwakwaka’wakw dancers from the North Island, led by Kwakiutl artist and hereditary chief Calvin Hunt.

The formal unveiling ceremonies were organized and emceed by Tseshaht First Nation. Elected Chief Councillor Wahmeesh Ken Watts said the Victoria Quay location, known as Nuupts’ ikapis, is an important one for Tseshaht First Nation as it was the site of a former village.

“I had no idea how many people would come today because I thought it would be pouring rain,” Watts laughed on Saturday. “All of you showed up today to honour Tim and all of us and, most importantly, this pole.”

The pole project was initiated by the First Nations Education Foundation (FNEF) in 2018 as part of the United Nations 2019 International Year of Indigenous Languages to draw attention to the importance of Indigenous languages and culture in Canada.

However, the meaning of the totem pole changed as the remains of hundreds of children have been discovered at various residential school sites across the country. The name “n’aasn’aas?aqsa” means “mother” in Nuu-chah-nulth, and lead carver Tim Paul said naasnaas?aqsa represents a mother for all those lost children so that they have a home to return to.

“Reconciliation is about rebuilding,” said Paul on Saturday. “We’re here to rebuild with each other.”

The pole started out as an 800-year-old fallen tree that was donated to the FNEF by the Huu-ay-aht First Nations. The original plan was to raise the pole at the University of Victoria, but heavy interest from people in the Alberni Valley convinced the FNEF to change the pole’s final resting place.

The pole experienced a number of setbacks due to finances and the COVID-19 pandemic, but a number of community donations—including a $75,000 donation from the Canada Arts Council—allowed it to be completed.

Last week, the pole was transported by San Group from its carving location at the waterfront and installed at its new home. The pole’s permanent location is close to the site of a former helipad and will be accessible to the public.