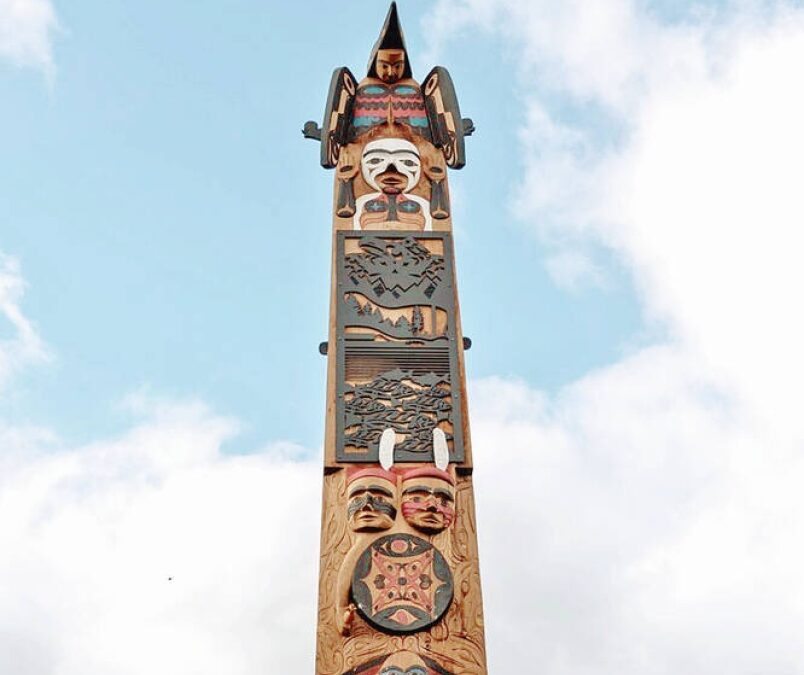 The power of earthquakes is reflected in two faces with a white feather. Lower down the pole is a grizzly bear with the wind above.

Carver Tim Paul, a member of the Hesquiaht First Nation with the Nuu-chah-Nulth people, said the pole represents the importance of culture, nature, family and history, and also sends a message that humanity needs to work together to make changes to protect and clean up the environment.

“We are related to nature wherever we come from,” he said.

The pole pays homage to women, who hold the songs, history and cultural teaching of First Nations in their memories, said Paul, who grew up with his grandmother and was influenced by other strong women in his family.

“Women have always been the backbone of who we are as a people, as a tribe.”

The pole stands near the spot in Port Alberni where Roger Street meets Victoria Quay, on Tseshaht territory and San Group property. The San Group is a Langley-based company that has invested $100 million in mills and manufacturing in Port Alberni and is planning a major housing development valued at $1 billion.

Tseshaht Chief Ken Watts said this is the fourth totem pole in Tseshaht territory raised within the past few decades. No historical poles remain. The Hupacasath First Nation, also in the Alberni Valley, has several welcoming poles.

“Any time you raise a totem pole, it is special because it tells a story and it means something. It has a life of its own, really,” Watts said.

Raising the pole near the river was significant because the water is the “lifeblood” of the Tseshaht community, said Watts, who expects an interpretive plaque will be installed at the pole.

“Those that go to enter San Group property or anybody that’s around the area now will always see it and feel it and it’ll just keep lifting spirits, I think, because it just has that energy and power behind it.”

The pole was carved from an 800-year old Western red cedar log blown down by the wind and hauled out of the forest by Western Forest Products, said Paul, adding it was “empowering” to give life back to the downed tree.

The project was initially intended to mark the UN International Year of Indigenous Language in 2019, but was stalled by lack of funding. It was originally supposed to be erected at the University of Victoria, but was kept in Port Alberni at the request of the community.

The pole was created through many hours of volunteer effort and contributions from individuals, organizations, and businesses, along with Canada Council for the Arts funding that arrived this year, Paul said.

“People kept coming and supporting the whole project,” he said.

The San Group was a leader in the effort to move the pole from Harbour Road to its final location. The amount of funds contributed is confidential, said San spokesman Mike Ruttan.

Several local companies donated time and expertise to the delicate job of moving and raising the pole on a specially designed base.

Some carvers were with Paul from day one. Others stopped by for an hour, days or weeks.

The pole can’t be attributed to just one person or organization, he said. “It was the whole community itself, the whole township,” he said.