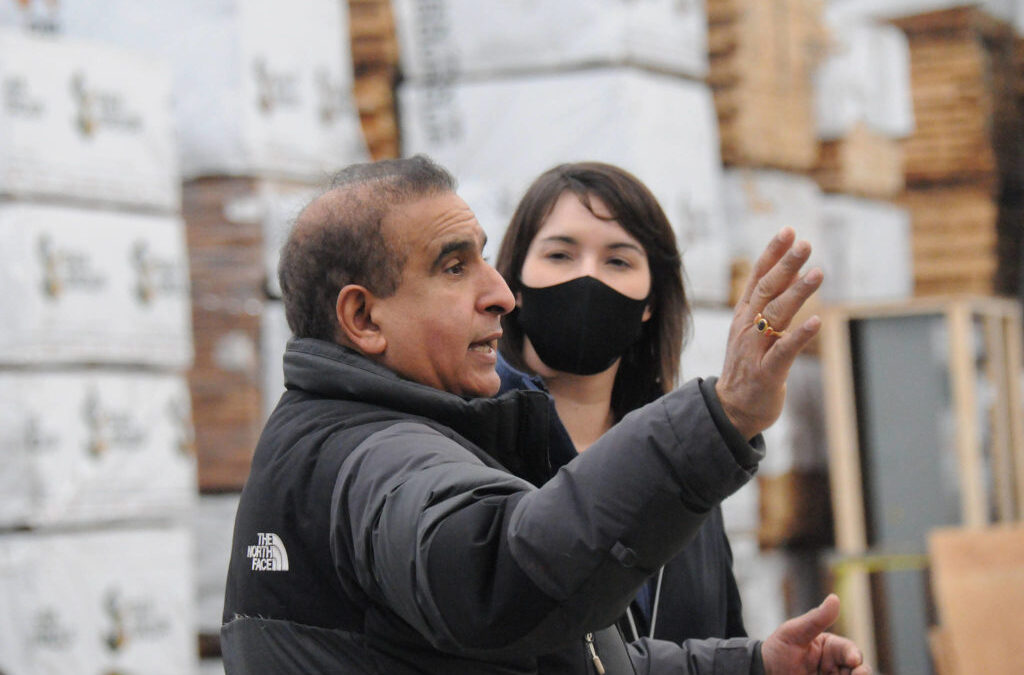 The mood at the site of San Group’s remanufacturing plant was light last week, as owners Suki and Kamal Sanghera toured the plant with Port Alberni Mayor Sharie Minions.

The Sangheras wanted to give Minions an inside view of what is happening behind the dirt berms along Stamp Avenue. New roofs from some of the buildings are now visible from the roads, raising the public’s curiosity.

The Sangheras hope to have most of the plant up and running sometime in April. It’s a relief after sitting and waiting through the coronavirus pandemic, company president Suki Sanghera said. “I feel better than two months ago.”

Construction is almost a year behind, Kamal Sanghera added.

Technicians should have been in Port Alberni last October to finish testing, but due to federal government restrictions on international travel, those having to come from Germany, the United States and even inter-provincially from Montreal, Quebec have been delayed.

“I think we will get it done by the end of the month sometime,” Sanghera said. “They (technicians) have to sit and wait for two weeks before they come back for all the testing. That’s already put us five months behind. Everything is ready: dry kilns have been sitting here since July or August and we were ready to install them.”

Separating electricity, storm drains and gas lines from neighbouring Paper Excellence has also been challenging: the Sangheras purchased 25 acres of property that used to belong to the paper mill.

While the company waits, warranties on some machinery that has yet to be installed have run out. Costs have gone up 30 to 35 percent. The company is paying $12,000 Euros (approximately CDN $18,000) per technician per week.

“We keep pushing,” he said.

Five or six buildings should be up and running by April, Suki Sanghera said, including the main manufacturing plant, laminator, finger jointer, paint line, dry kilns and stick building. When the whole site is built there will be 300,000 square feet of buildings with six acres of blacktop in between.

New use for burned out building

Construction also suffered a setback in April 2020 when a building housing the finger jointer machine burned down due to a welding mishap. The finger jointer was moved to another building, so the Sangheras moved the painting and staining line into the rebuilt area, expanding their lines to four.

“The fire gave us another fire inside,” Sanghera said. “There are two ways to look at it: you give up or you fire up inside.”

A second sawmill that has been under construction at San’s Coulson site is nearing completion as well. Sanghera said they are “65–70 percent up and running” but they are still building their log processing system and moving things around the site. They hope to be fully operational by April.

The heli-pad at the Stamp Avenue site has been used for storage as equipment is moved around to accommodate contractors. It will still be put to use once the reman plant is running: San intends to move its heli-logging operations to Port Alberni from Campbell River, Kamal Sanghera said.

One casualty of the San Group’s expansion will be Usma Nuu-chah-nulth Family and Child Services, which currently leases a building that San owns. San will need the building for office space once the reman plant is fully operational, Sanghera said. Usma was given an extension last year, but will have to look for a new space.