PROGRESS 2021: Moving up from the green chain to the green machine 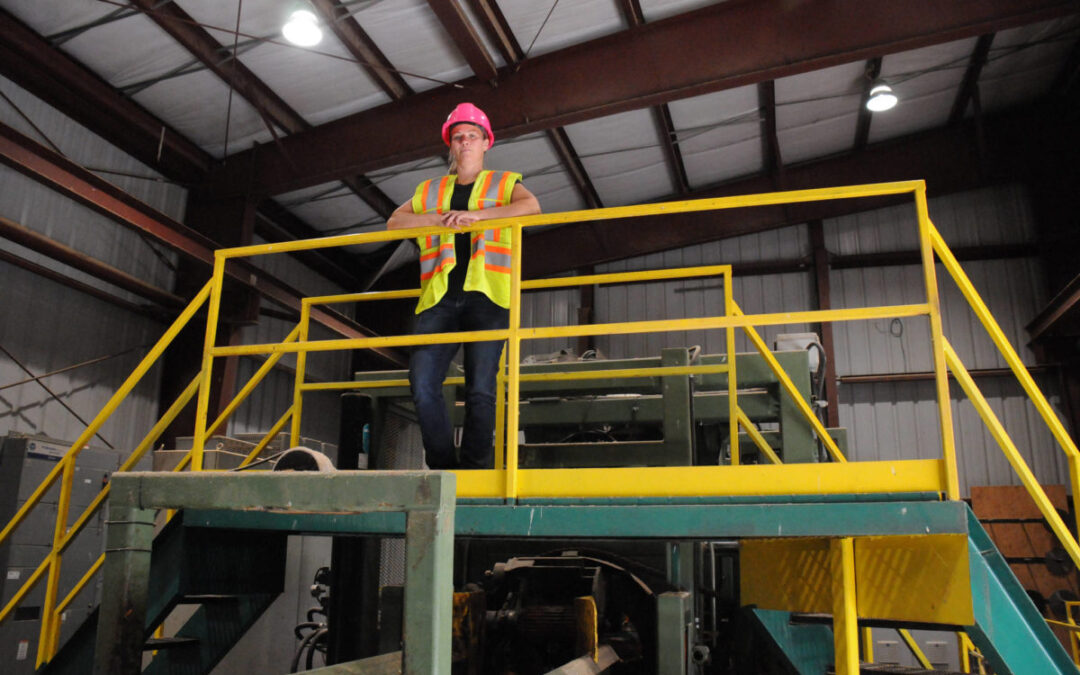 Jennifer Weightman of Port Alberni started working at the Coulson Sawmill, now owned by San Group, on the green chain when she was a teenager. Now she is the sole operator of the new hewsaw. (SUSAN QUINN/ Alberni Valley News)

This story is part of our Progress 2021 publication. You can read the special edition in its entirety on our website.

Jennifer Weightman was still a teenager when her mother spotted an ad in a local newspaper from a sawmill looking for female employees. She had to pass a physical before her employers would agree to hire her for a job working on the green chain.

That was 20 years ago. Now, Weightman is the sole operator of San Group’s brand new hewsaw at the Coulson Sawmill in Port Alberni.

“When I started down here it was the old planer mill with Coulson. That planer is no longer here,” said Weightman, standing in her office behind reinforced windows that overlook a portion of the green hewsaw machine.

She transferred to the main sawmill and worked in packaging (there used to be two mills on what San still refers to as the Coulson Sawmill site). She spent another six or seven years as a charge hand at the engineered siding plant that has since been moved to San’s new remanufacturing plant on Stamp Avenue.

“I really, really liked that product and making it.”

Because of her seniority and management experience she was chosen in June 2020 to run San Group’s new-technology hewsaw. “I knew the concept of this when it was going in.”

She oversees the employees and process that takes logs from a loading deck through a debarked, then a scanner that determines the size, grade and cutting dimensions of a log, through to a sorter once the log is sliced into lumber. She stands in front of a bank of knobs, dials and computer readouts as well as a number of live video feeds from each section of the hewsaw. When there is a problem, she is the go-to problem solver.

“It’s pretty cool sawing up logs every day,” she says. “Not a lot of women get to do that.”

When the machine is running fast it can run small logs at 300 feet per minute. “It’s constant; you can’t take your eyes off it.”

The best shift she’s ever had was 3,328 logs go through the hewsaw, and 95,000 board feet of lumber cut in one day. San manager Bruce Molander said he won’t be surprised if Weightman sets a higher goal and surpasses it.

“She’s worked very hard to get where she is now.”

“In our family, what I call the San family, everybody is equal,” Sanghera said. “We like to give more opportunity (to our employees), it does not matter the gender.”

Weightman is one of five women working at the Coulson Sawmill site. She said things have changed in the 20 years since she was hired.

“At the time when I got hired down here they actually put you through a physical…to make sure you could do (the job). I passed. They were still questioning me, saying ‘she’s pretty small.’”

Weightman is five-foot-three in an industry where her male counterparts are, well, taller. “I didn’t think I was going to last this long,” she says, grinning.

“I like the industry, myself. It’s good to get up in the morning and come to an environment like this.”

In 2007 when times were slow in the forest industry she went back to school to become a nurse. “I ended up coming back to the mill when it picked back up.”

She puts her nursing background to good use though: she has her Level 3 first aid ticket and is first aider at the Coulson site.